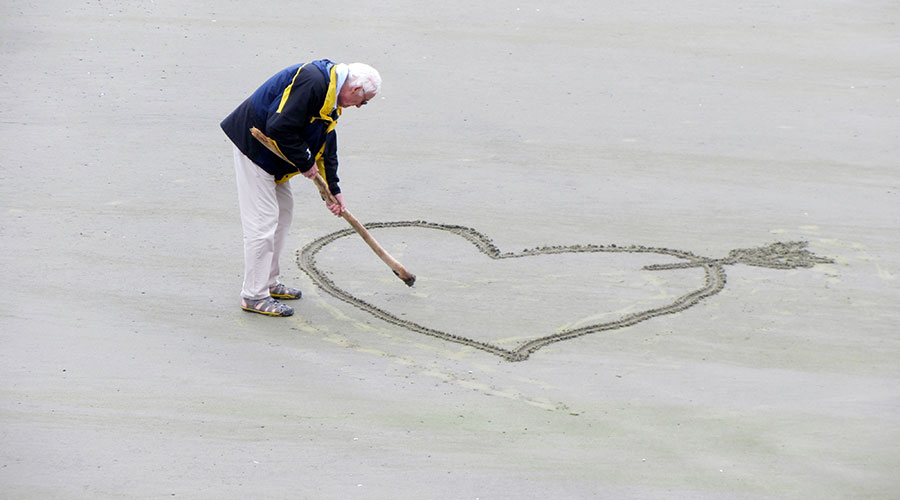 Hospice was great. I had been effectively doing pretty much everything in terms of her care up to that point. So once we flipped the switch to hospice, some of that responsibility was taken off of my shoulders. Hospice of Holland immediately set up a team of individuals who had differing responsibilities. From the social work aspect, to the nursing aspect, and the day-to-day care. All of those responsibilities that had been on me for all those months. That was taken completely off my plate. Which allowed me to refocus on my wife in those last weeks and days. They worked with me and bared that responsibility, and just allowed me to be her caretaker part time as opposed to full time, and just go back to being her husband.

It was wonderful. They walked us through everything. Anytime we called if (Hospice of Holland) felt they needed to come out, someone would come right away. If we needed supplies, sometimes they would make extra stops just to bring us stuff. I can’t say enough about hospice. At the end of both (my parent’s) lives Hospice of Holland came out and took care of everything. For example taking the bed and all the supplies away. We didn’t have to worry about any of that. We very much appreciated it.

Hospice has made such a difference. I live 500 miles away. If I need to know details, I can call and ask her social worker or nurse. They are health care professionals who can tell me what is going on, explain medications, and tell me who I can talk to. We couldn’t keep her at home without all the help from Hospice. The respite time for Al each week is very important. Mom is happy. She loves having company. She was isolated before Hospice.

You can see the mission of hospice is all about the patient. The staff was immediately accessible and visible if we needed them to be. It was the little things and the attention to detail that made the difference. It was all done with such class and we never felt like we were facing this alone.

I want you to know how happy and grateful we are for the excellent service rendered to my wife, Aileen, during weeks of loving care prior to her death on December sixteenth. Nowhere could there be such a dedicated staff who showed so much sincere care and love. Amazing! We experienced Hospice House as well as home care and everyone on the staff was uplifting and willing to do everything to meet our needs and desires. The coordination and cooperation within staff members was unbelievable. You can be sure I will continue to praise Hospice and, without reservation, will recommend them to anyone who might need their services.

I thought [Hospice] just sat with a dying person and comforted them and the family. I now know they do soooo much more. Yes, they are with dying people but they give them a life while they are still living. I don’t know of a happier life my mom could have even though she is ill and nearing 95. She loves the care of her new Hospice friends, which makes the rest of us happy for her.

For my mother, the vigil was very beneficial. In her mind, even though she was at Hospice House, was going to be alone if someone wasn’t in the room with her. We had the volunteers with with her for three or four nights and it was very much appreciated. It gave her comfort to wake up and have someone right there. Her biggest fear was to die alone, and although our family was with her a great majority of the time, we couldn’t always be there. It was a great comfort to us to know that someone was with her, especially because she didn’t know enough to push the alert button herself if she needed a nurse. Having a person sitting by her side through the night was very helpful.

As you might know my brother Dan passed a couple of weeks ago and I just want to say how professional and loving your representatives were. As I am sure you hear, I wish they would have been involved much earlier. However we had trouble getting a doctor to say no more treatments – something I am sure you have also heard before. I personally had to find the lead doc in GR and ask her to stop saying she was considering more chemo. As it was you guys only got involved about 2 days before he passed.

I have heard about last messages and received a book title “Final Gifts” that gives plenty of examples of statements of individuals about to pass – the goal of the book is to share the idea that we do not pass alone. Just a few hours before Dan passed I was holding his hand and nodding off when I felt him squeeze my hand and when I looked up he looked like he regained strength he had a week before and as he looked at me he said “Mike they are calling my name” – how comforting for me to hear, and just a few hours later he passed.

Again, thank you so much for your organization and for finding the right people.

“We have experienced Hospice of Holland as well as home care, and everyone on the staff was so uplifting and willing to do everything to
meet our needs
and desires.”

Contact Hospice of Holland regarding our services, and how they will help you and a loved one. No obligation.

TALK TO US
Go to Top